« on: February 01, 2018, 09:46:10 PM »
The question of IPTV being Legal or illegal has been asked by many and we are going to look at the facts and surely find an answer to the question. However, I am going to explain a few things you need to know about IPTV.

IPTV is an acronym for Internet Protocol television just as the name clearly shows. it is the delivery of television programs through Internet data connection signals instead of a satellite dish or antenna. It's television via internet protocol. 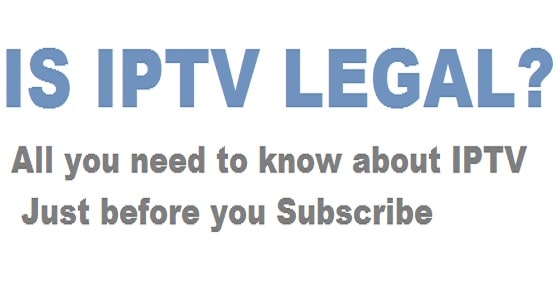 An IPTV works down from the 'drawing board' as an internet interface that allows subscribers to access or view contents by a process known as streaming.

Streaming involves making a web interface capable of simultaneous downloading and playing contents on a user's device. The device could be your smartphone, Laptop, and Tablet. Well, most users choose IPTV mostly because they offer most of the best and latest movies, sports, entertainment, and on-demand content.

IPTV is also cheaper, cost-efficient. compared to cable TV subscriptions. It's doesn't require much setup to work and mostly requires some streaming apps such as Kodi, Mobdro, and some other video stream apps that allow you to stream video content for free.

Is IPTV Legal or illegal?

Let me give you a straight answer to this question wether an IPTV is legal or illegal, in most countries streaming the latest movies or streaming any type of copyrighted content is illegal and that's a simple truth.

However, an IPTV provider can operate legally when they acquire proper media publishing rights for the channels they deliver to their subscribers. Directv Now, Sling TV, Youtube TV, Hulu are some of the examples of legal IPTV services. They managed to do this through a revenue-sharing plan with original content owners.

All types of IPTV can be distributed via the public Internet or through a managed, private network. The main types of IPTV include:

1. The widely used IPTV is the video on demand (VOD): This involves using internet television via a service like the online movie site - Netflix. Here, from a wide range of movies, you select the one that pleases you and pay for it, then start streaming.

2. Another type of IPTV is called time-shifted IPTV and entails watching ordinary, scheduled broadcasts at a time at your convenience.

A good example of this could be found in its web-based streaming video player called the BBC iPlayer. With the app, you could watch a week ago programs from the BBC online.

3. Live IP simulcasting: This involves simultaneous broadcasting lived programs on the internet. This and all the three forms of IPTV can be achieved using your computer and an ordinary web browser or a set-top box and an ordinary digital TV. Youtube and Kodi are good examples of IPTV.

Illegal IPTV and IP pirating - What are these channels?

Due to the increase in illegal IPTV, certain live IPTV apps are not allowed on many app stores. The ones allowed are paid because they are seen as a legitimate IPTV provider.

Legal or legitimate IPTV channels are IPTV service that is offered by the original owner of the contents. They are 100% legal.

Youtube is a legal IPTV because it offers open source contents without any restrictions via their App. However, if you are downloading youtube videos by using a 3rd party app, then it becomes illegal.

Kodi software is also 100% legal. Official Kodi add-ons that are available on Kodi websites are 100% legal but, the third party Kodi add-ons can either be legal or do contain contents pirated.